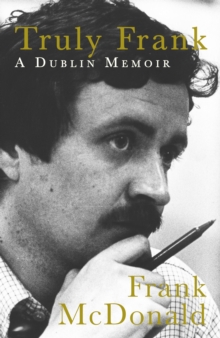 'Without doubt, it's the memoir of the year' Irish IndependentPassionate, gossipy, opinionated and seriously entertaining, Truly Frank is an instant classic of journalistic memoir.

Journalist Frank McDonald is best known as, in the words of Bob Geldof, 'a permanent thorn in the fat arse of municipal pretension'. The scourge of negligent planners, unscrupulous property developers and cynical politicians, and champion of environmental protection and sustainable development, McDonald's work in the Irish Times has been key to grasping how Ireland actually works. McDonald's sense of mission grew out of an endlessly enquiring mind.

After a happy 1950s childhood in a conventional Catholic home he ventured forth - into Dublin's hidden gay scene, into student politics at UCD, into the worlds of journalism, architecture and Ireland's beau monde, into a life of travel - always in a spirit of openness and unmitigated curiosity.

The rewards in friendship, knowledge and understanding have been immeasurable. Now, in Truly Frank, McDonald tells the stories behind his public and private lives - his long and fruitful career, his activism and legendary battles, his deep ties to family and friends, his four-decade partnership with his spouse Eamon Slater. 'Although, as a journalist, I have never shied away from revealing what I believe to be true, revisiting my life and times has been as challenging as it has been therapeutic and even enjoyable ...''A memoir not just of a fascinating life, but of a fascinating city' Caitriona Crowe'It's a wonderfully indiscreet romp through several decades of Dublin life which will have many people who were around at the time nervously scanning the index. ... Without doubt, it's the memoir of the year' Irish Independent'In this witty and revealing memoir, he tells the public tale of his advocacy, including battles with politicians and property developers, and the private tale of growing up gay in Ireland when homosexuality was hidden' Cara'McDonald's account of childhood on Dublin's northside smashes forever the heart of the rowl monopoly of writers like Peter Sheridan ...