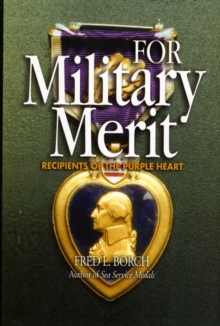 For Military Merit : Recipients of the Purple Heart Hardback

More than one million men and women have received the Purple Heart since its creation as an award "for military merit" in 1932.

This book provides a brief history of the Purple Heart, with a focus on how the decoration's award criteria have evolved over the last 75 years.

The book then takes a representative look at Purple Heart recipients from all the services by conflict, starting with the Civil War and concluding with the ongoing conflicts in Afghanistan and Iraq. The Purple Heart was first awarded to General McArthur.

Other famous recipients include President John F. Kennedy and actor Charles Bronson. Six US soldiers have won the award an incredible eight times each.

Notably Robert L. Howard who obtained all eight for service in Vietnam and also received the Medal of Honor. About the AuthorFred L. Borch served 25 years active duty as an Army lawyer and retired in 2005.

A professionally trained historian (M.A., Univ. of Virginia), he now serves as the Regimental Historian and Archivist for the U.S.

Army Judge Advocate General's Corps. He is the author and co-author of many books and articles on military medals.