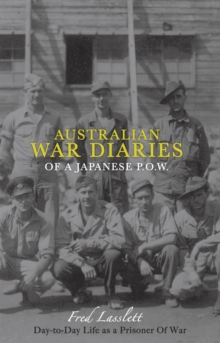 Australian War Diaries of a Japanese P.O.W. is a remarkable story of survival and the endurance of Australian spirit in the face of adversity.

Fred Lasslett went down with the HMAS Perth off Indonesia, and was captured by the Japanese.

He spent the remainder of the war in POW camps in Indonesia and Japan, but through it all maintained a diary in the form of letters home to his "elusive girl", written on cigarette paper and preserved to this day.

Fred's diaries include amazing stories of escape and recapture, with the author ultimately facing a Japanese firing squad and telling how he survived.

These letters reveal a spirit unshaken in the face of long imprisonment, failed escape attempts and dreary conditions in the Japanese work camp.

Grim, unquenchable, uplifting; Australian War Diaries of a Japanese P.O.W. is sure to inspire.