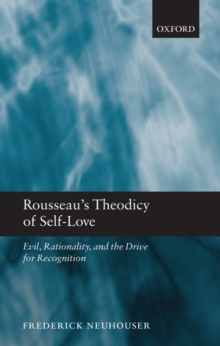 Rousseau's Theodicy of Self-Love : Evil, Rationality, and the Drive for Recognition Hardback

This book is the first comprehensive study of Rousseau's rich and complex theory of the type of self-love (amour propre ) that, for him, marks the central difference between humans and the beasts.

Amour propre is the passion that drives human individuals to seek the esteem, approval, admiration, or love-the recognition -of their fellow beings.

Neuhouser reconstructs Rousseau's understanding of what the drive for recognition is, why it isso problematic, and how its presence opens up far-reaching developmental possibilities for creatures that possess it.

One of Rousseau's central theses is that amour propre in its corrupted, manifestations-pride or vanity-is the principal source of an array of evils so widespread that they can easily appear to be necessaryfeatures of the human condition: enslavement, conflict, vice, misery, and self-estrangement.

Yet Rousseau also argues that solving these problems depends not on suppressing or overcoming the drive for recognition but on cultivating it so that it contributes positively to the achievement of freedom, peace, virtue, happiness, and unalienated selfhood.

Indeed, Rousseau goes so far as to claim that, despite its many dangers, the need for recognition is a condition of nearly everythingthat makes human life valuable and that elevates it above mere animal existence: rationality, morality, freedom-subjectivity itself-would be impossible for humans if it were not for amour propre and the relations to others it impels us to establish.