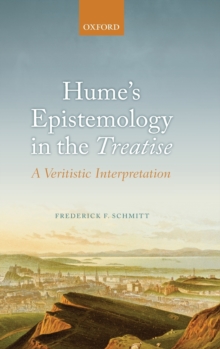 Hume's Epistemology in the Treatise : A Veritistic Interpretation Hardback

Frederick F. Schmitt offers a systematic interpretation of David Hume's epistemology, as it is presented in the indispensable A Treatise of Human Nature.

Interpretations of his epistemology have tended to emphasise one of these apparently conflicting positions over the others.

Hume adopts Locke's dichotomy between knowledge and probability and reassigns causalinference from its traditional place in knowledge to the domain of probability-his most significant departure from earlier accounts of cognition.

He does this by finding an epistemic status shared by demonstrative knowledge and causally inferred beliefs-the status of justified belief.

He then argues that causally inferred beliefs are reliable, so share this status with knowledge.

Indeed Hume assumes that causally inferred beliefs enjoy this status in his very argument for associationism.

On the reliability interpretation, Hume's accounts of knowledge and justifiedbelief are part of a broader veritistic epistemology making true belief the chief epistemic value and goal of science.

Veritistic interpretations are offered of the natural function of belief, the rules of causal inference, scepticism about body and matter, and the criteria of justification.

As Schmitt shows, there is much attention to Hume's sources in Locke and to the complexities of his epistemic vocabulary.