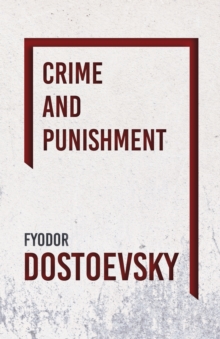 "Crime and Punishment" is an 1866 novel by Russian author Fyodor Dostoevsky.

The narrative concerns the inner anguish of Rodion Raskolnikov, a poor ex-student in Saint Petersburg who conceives a murderous plan to steal from a notorious pawnbroker.

However, after the deed is done he deteriorates into a feverish state and begins to fret obsessively.

In his delirium, Rodion wanders the streets of the city unknowingly drawing attention to himself and his connection to the crime.

A masterpiece that places you into the confused mind of a misguided murderer, Dostoevsky's "Crime and Punishment" is a classic of Russian literature not to be missed by any lover of fiction.

His literature examines human psychology during the turbulent social, spiritual and political atmosphere of 19th-century Russia, and he is considered one of the greatest psychologists in world literature.