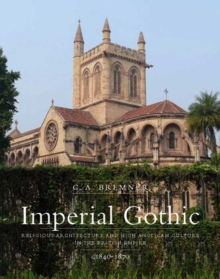 The Gothic Revival movement in architecture was intimately entwined with 18th- and 19th-century British cultural politics.

By the middle of the 19th century, architects and theorists had transformed the movement into a serious scholarly endeavor, connecting it to notions of propriety and "truth," particularly in the domain of religious architecture.

Simultaneously, reform within the Church of England had worked to widen the aesthetic and liturgical appeal of "correct" gothic forms.

Coinciding with these developments, both architectural and religious, was the continued expansion of Britain's empire, including a renewed urgency by the English Church to extend its mission beyond the British Isles. In this groundbreaking new study, G. A. Bremner traces the global reach and influence of the Gothic Revival throughout Britain's empire during these crucial decades.

Focusing on religious buildings, he examines the reinvigoration of the Church of England's colonial and missionary agenda and its relationship to the rise of Anglican ecclesiology, revealing the extraordinary nature and extent of building activity that occurred across the British world.