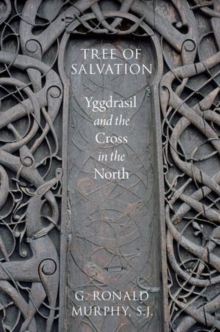 Tree of Salvation : Yggdrasil and the Cross in the North Hardback

At the heart of the mythology of the Anglo-Scandinavian-Germanic North is the evergreen Yggdrasil, the tree of life believed to hold up the skies and unite and separate three worlds: Asgard, high in the tree, where the gods dwelled in their great halls; Middlegard, where human beings lived; and the dark underground world of Hel, home to the monstrous goddess of death.

With the advent of Christianity in the North around the year 1000, Yggdrasil was recast as the crosson which Christ sacrificed himself.

Ronald Murphy offers an insightful examination of the lasting significance of Yggdrasil in northern Europe, showing that the tree's image persisted not simply through its absorption into descriptions of Christ's crucifix, but through recognition by the newlyconverted Christians of the truth of their new religion in the images and narratives of their older faith.

Rather than dwelling on theological and cultural differences between Christianity and older Anglo-Scandinavian beliefs, Murphy makes an argument internal to the culture, showing how the new dispensation was a realization of the old.

He shows how architectural and literary works, including the Jelling stone in Denmark, the stave churches in Norway, The Dream of the Rood, the runes of the futhark, the round churches on Bornholm, the Viking crosses at Middleton in Yorkshire and even the Christmastree, are all indebted to the cultural interweaving of cross and tree in the North.

Tree of Salvation demonstrates that both Christian and older Northern symbols can be read as a single story of salvation.