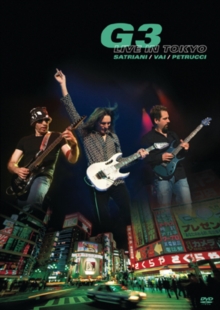 Acclaimed guitarists John Petrucci, Steve Vai and Joe Satriani join forces for a 2005 gig in Tokyo. Organised by Satriani, each G3 tour sees him pair up with another two guitarists, in this case his former pupil, Vai, and the Dream Theater guitarist, Petrucci.

As well as combining their powers for an encore of classic songs including 'Foxy Lady' and 'Smoke On the Water', Vai, Satriani and Petrucci take to the stage individually to perform their own material.