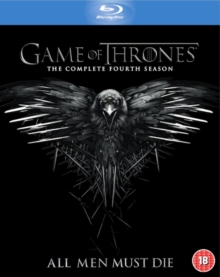 The complete fourth season of the HBO medieval fantasy drama based on the bestselling novel series 'A Song of Ice and Fire' by George R.R.

In this season, Tyrion Lannister (Peter Dinklage) finds his life is in danger when he is accused and put on trial for murder.

Elsewhere, Jon Snow (Kit Harington) and the brothers of the Night's Watch defend the Wall when the wildlings launch an attack.

The episodes are: 'Two Swords', 'The Lion and the Rose', 'Breaker of Chains', 'Oathkeeper', 'First of His Name', 'The Laws of Gods and Men', 'Mockingbird', 'The Mountain and the Viper', 'The Watchers On the Wall' and 'The Children'.