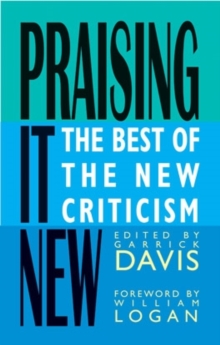 Praising it New : The Best of the New Criticism Hardback

Marked by a rigorously close textual reading, detached frombiographical or other extratextual material, New Criticism was thedominant literary theory of the mid-twentieth century.

Since thattime, schools of literary criticism have arisen in support of or in opposition tothe approach advocated by the New Critics.

Nonetheless, the theory remainsone of the most important sources for groundbreaking criticism and continuesto be a controversial approach to reading literature. Praising It New is the first anthology of New Criticism to be printed in fiftyyears.

It includes important essays by such influential poets and critics asT.

P. Blackmur, W. K. Wimsatt, and Robert Penn Warren. Together, these authors ushered in the modernist age of poetry and criticismand transformed the teaching of literature in the schools.

As the Americanpoet and critic Randall Jarrell once noted: \u201cI do not believe there has been anotherage in which so much extraordinarily good criticism of poetry hasbeen written.\u201dThis anthology now makes much of the best American poetry criticism availableagain, and includes short biographies and selected bibliographies of itschief figures.

Praising It New is the perfect introduction for students to thebest American poetry criticism of the twentieth century.