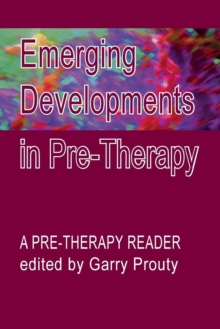 Garry Prouty writes: In developing this book with my colleagues, I have come to realize that Pre-Therapy is not only a theory and technique of psychotherapy, but also a method of understanding psychological phenomena.

Western humanistic psychology has traditionally focused on higher levels of human functioning such as peak experiences or self actualization.

Pre-Therapy is a commitment to understand and treat the regressed levels of 'Being in the World'.

It is possibly a paradigm shift within western humanistic psychology.In a different sense, Pre-Therapy is a cultural conserve.

It also embraces a 'concrete phenomenology'. In Martin Buber's language this is described as 'pointing at the concrete'.

Pre-Therapy enables the therapist to contact the patient's regressed levels through the concreteness of the Contact Reflections.

What is important about this text, is not Pre-Therapy itself.

This can be read in other books and papers.What is important in this text is the growth resulting from Pre-Therapy. Roughly speaking Pre-Therapy has undergone three changes: 1966-1986 'birth' in the United States; 1986-2006 Expansion and growth in Europe; and, The expansion beyond itself to other distinct and separate psychological phenomena - a second generation of theorizing and applications.

For the reader not familiar with Pre-Therapy, Part I outlines a brief history of the approach and Part II is a review of the theory itself.

They have their commonality only by being rooted in Pre-Therapy.

They are emergent developments.