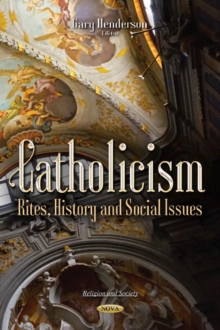 Throughout its history, the Roman Catholic Church continues to have a complex and evolving relationship with the political societies and governments of our world. One of the foremost expressions of this relationship is in the form of the teachings and social and political engagements of Catholic bishops and other ordained. Despite the Churchs universalism, these manifestations of Catholic authority are mediated by local societal context and thus take on different character in different places.

Chapter One intends to reconstruct, for the first time, and with the help of unpublished documents taken from the historical archive of the Conservatory, the history of this prestigious Roman institution, focusing on the innovations introduced in its educational-assistance program in the course of the late XIX century, during the Fascist period and after World War II.

Chapter Two sets out to address the concept of collusion, forged by Roger Griffin and Emilio Gentile within the field of the Politic History, arguing that it needs to be adjusted to work properly in the field of the History of Religions.

Chapter Three explores the relationship between ordained Catholic leadership and political society through an examination of recent political controversy in four countries: the Republic of Ireland, the Philippines, the United States, and Canada.