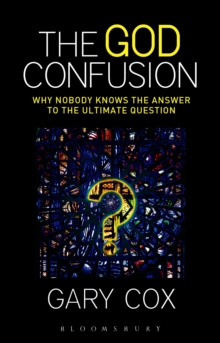 The God Confusion : Why Nobody Knows the Answer to the Ultimate Question Hardback

What is God? Does he exist? Can we know?The God Confusion offers a down-to-earth beginner's guide for anyone interested in these questions.

It does not evangelize for God and religion or, indeed, for atheism, secularism and science.

Instead, it explores in a witty yet objective and balanced way the idea of God and the strengths and weaknesses of the standard arguments for his existence.

Gary Cox shows that the philosophical reasoning at the heart of these arguments is logically incapable of moving beyond speculation to any kind of proof.

The only credible philosophical position is therefore agnosticism.

The God Confusion defends science generally and the theory of evolution in particular.

It argues that if religion is not to appear increasingly outdated and ridiculous in the eyes of free-thinking, educated people, it must accommodate science and accept that science has replaced the old God of the gaps as an explanation of natural phenomena. Concluding that God may or may not exist, on the grounds that science, philosophy and theology are inherently incapable of proving or disproving his existence, The God Confusion acknowledges that religious faith based on a deliberate commitment to live as though there is a moral God is a coherent notion and a worthwhile, even prudent enterprise.

At the same time, it rejects the idea of inner certainty as mere wishful thinking, arguing that it is not a coherent basis for belief and is simply bad faith.