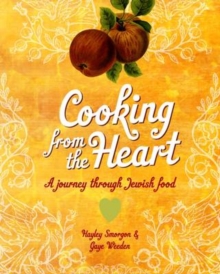 Cooking from the Heart : A Journey Through Jewish Food Hardback

Australia is home to a vibrant and close-knit Jewish community, drawn together by the customs of the kitchen.

But the roots of this community reach across the globe.

From the shtetls of Eastern Europe to the tropical paradise of 1930s Rangoon, these brave and resilient migrants have overcomeuntold hardships and found a welcoming home in Australia, while creating a culture and cuisine enriched by many diverse backgrounds.

Featuring the compelling stories and nourishing recipes of 26 migrants from across the globe, Cooking from the Heart features traditional classics such as latkes and onion soup along with less typically Jewish fare, such as the Brazilian-inflected Picanha with farfale.

With dishes that reflect their far-flung origins, such as the Scandinavian lingonberry pie and coconut babas, this book is an eclectic sampling of the dishes that characterise the Jewish community.

Beautifully photographed by Mark Roper, Cooking from the Heart gives readers a feast for the eyes and food for the soul.