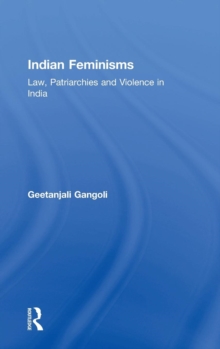 Contributing to debates on feminism, this book considers the impact made by feminists in India from the 1970s.

Geetanjali Gangoli analyses feminist campaigns on issues of violence and women's rights, and debates on ways in which feminist legal debates may be limiting for women and based on exclusionary concepts such as citizenship.

She addresses campaigns ranging from domestic violence, rape, pornography and son preference and sets them within a wider analysis of the position of women within the Indian state. The strengths and limitations of law reform for women are addressed as well as whether legal feminisms relating to law and women's legal rights are effective in the Indian context.

The question of whether legal campaigns can make positive changes in women's lives or whether they further legitimize oppressive state patriarchies is considered.

The recasting of caste and community identities is also assessed, as well as the rise of Hindu fundamentalism and the ways in which feminists in India have combated and confronted these challenges. Indian Feminisms will interest researchers and students in the areas of feminism, law, women's movements and social movements in India, and South Asia more generally.