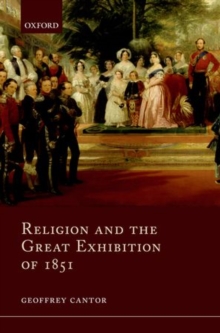 Religion and the Great Exhibition of 1851 Hardback

The Great Exhibition of 1851 is routinely portrayed as a manifestly secular event which was confined to celebrating the success of science, technology, and manufacturing in the mid-Victorian age.

Geoffrey Cantor presents an innovative reappraisal of the Exhibition, demonstrating that it was widely understood by contemporaries to possess a religious dimension and that it generated controversy among religious groups.

Prince Albert bestowed legitimacy on the Exhibition by proclaiming it to be a display of divine providence whilst others interpreted it as a sign of the coming Apocalypse.

With anti-Catholic feeling running high following the recent 'papal aggression', many Protestants roundly condemned those exhibits associated with Catholicism and some even denounced the Exhibition as a Papist plot.

Catholics, for their part, criticized the Exhibition as a further example of religious repression.

Severalevangelical religious organisations energetically rose to the occasion, considering the Exhibition to be a divinely ordained opportunity to make converts, especially among 'heathens' and foreigners.

Jews generally welcomed the Exhibition, as did Unitarians, Quakers, Congregationalists, and a widespectrum of Anglicans - but all for different reasons. Cantor explores this diversity of perception through contemporary sermons, and, most importantly, the highly differentiated religious press.

Taken all together these religious responses to the Exhibition shed fresh light on a crucial mid-century event.