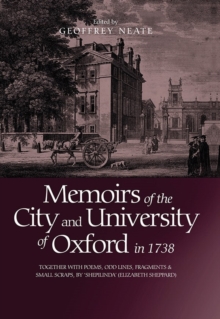 Memoirs of the City and University of Oxford in - Together with Poems, Odd Lines, Fragments & Small Scraps, by `Shepilinda` (Elizabeth Sheppard) Hardback

"Shepilinda's Memoirs of the City and University of Oxford" is a light-hearted but valuable manuscript account of the Oxford colleges in 1738, written by a lively and engaging young woman who had a measure of social access to many of them.

Elizabeth Sheppard (pen-name "Shepilinda") was accompanied on her visits by a friend and confidante with the nickname "Scrippy", for whom the resulting memoir and appended collection of poems are intended as a gift.

Elizabeth clearly had a facility for getting people to talk to her quite freely, together with a quick grasp of the information she received; she also had a lively, sometimes mischievous, sense of humour.

The work, frequently unflattering to the dons (the wife of one is described as "ever a Moving Dumpling"), is entertaining, informative, and also unusual, in that women's voices are rarely heard at that date. The Memoirs are presented here with an introduction and notes, providing information on the people involved and setting them into context. Until his retirement GEOFFREY NEATE worked at the Bodleian Library, Oxford, with particular responsibility for computerising the catalogue entries for books published before 1920.