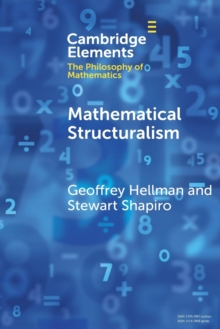 Part of the Elements in the Philosophy of Mathematics series

The present work is a systematic study of five frameworks or perspectives articulating mathematical structuralism, whose core idea is that mathematics is concerned primarily with interrelations in abstraction from the nature of objects.

The first two, set-theoretic and category-theoretic, arose within mathematics itself.

After exposing a number of problems, the Element considers three further perspectives formulated by logicians and philosophers of mathematics: sui generis, treating structures as abstract universals, modal, eliminating structures as objects in favor of freely entertained logical possibilities, and finally, modal-set-theoretic, a sort of synthesis of the set-theoretic and modal perspectives.