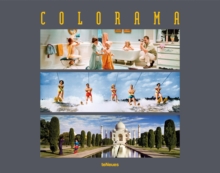 For 40 years, the Colorama dominated the east wall of New York City's Grand Central Terminal, where it was seen by thousands of people passing through each day.

The massive backlit transparencies measured 60 feet wide by 18 feet tall and changed every few weeks between 1950 and 1990, resulting in a total production of 565 Coloramas.

Eastman Kodak Company conceived of the imposing size and vibrancy to demonstrate the brilliance of colour photography, and thus, the company's colour film products.

The Colorama display in Grand Central Terminal was one of the longest and most successful corporate marketing campaigns of the 20th century and continues to be examined in the context of the history of advertising and colour photography. Text in English, German and French.