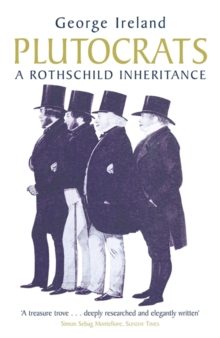 When the German-Jewish Rothschild family founded a chain of banks in Frankfurt, London, Paris, Vienna and Naples, it made them the world's richest in the 19th century.

Lionel, Anthony, Nathaniel and Mayer were the first British-born members of this incredible family; this is the story of their triumph over prejudice and bigotry to become the first Jews accepted into the upper echelons of English and European society.

Numbering among their friends Gladstone, Disraeli, Browning, Tennyson and Dickens, they lived in a style surpassing that of even today's richest. Written with the co-operation of the family and unique access to previously unseen archives, this biography reveals the intimate lives, lifestyles and difficulties of this most fascinating of families whose name remains a byword for wealth.