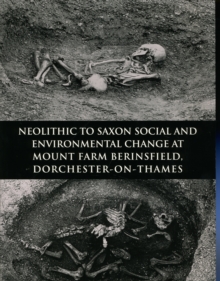 Excavations at Mount Farm revealed a long sequence of activity running from the early Neolithic to the early Saxon period.

The most significant finds include early Neolithic pit deposits, a middle Neolithic oval barrow associated with a primary burial and a secondary Beaker burial, a timber post-ring, an earlier Bronze Age round barrow associated with Deverel-Rimbury secondary burials, a later Bronze Age waterhole and burnt mound, extensive remains of an Iron Age settlement and a well-preserved Anglo-Saxon well.

This is an innovative report which approaches the site from a thematic perspective which highlights social, economic and environmental change over the long period during which the site was occupied.