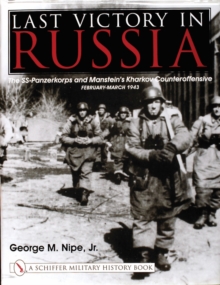 This book is the first detailed and comprehensive account of the Kharkov counteroffensive, the operations of the SS divisions and the supporting actions of Armeeabteilung Fretter-Pico and 1.

Panzerarmee, and is supported by over 210 photographs and maps.

By the end of January of 1943, Hitler's armies had been dealt a series of defeats by the Russians, beginning with the disaster at Stalingrad.

Armee and annihilated the armies of Germany's Axis allies, Italy, Rumania and Hungary.

Germany teetered on the brink of defeat in World War II because the Soviet advance threatened to drive to the Dnepr River and encircle the remaining Germans armies in southern Russia.

Stalin and the Russian high command believed that the war could be won with just one more great effort.

Accordingly, they planned and launched two offensives, designated Operations "Star" and "Gallop." The focal points of the two offensives included the recapture of Kharkov, the industrial heart of the Ukraine and the destruction of Armeeabteilung Hollidt, 4.

Panzerarmee and 2. Armee. Feldmarschall Erich von Manstein entered the picture in late 1942 when he was appointed commander of Heeresgruppe Don.

Beginning in February he engineered a remarkable operation that changed the course of the war in Russia.

Manstein's counteroffensive destroyed or severely damaged four Russian armies and regained much of the territory lost in January.

The troops that played the most important role in the offensive were three divisions of the Waffen-SS. "Leibstandarte," "Das Reich" and "Totenkopf" were combined for the first time into a corps, which was commanded by SS-ObergruppenfA"hrer Paul Hausser, the senior commander of the Waffen-SS. "Leibstandarte" and "Das Reich" participated in the defense of Kharkov, along with the elite Army division "Grossdeutschland" supported by three weak infantry divisions.

This handful of divisions was attacked by four Soviet armies, but under command of Armeeabteilung Lanz, was able to hold the city for two weeks.

On 14 February, 1943 the SS-Panzerkorps and the rest of Armeeabteilung Lanz withdrew from Kharkov under disputed circumstances that involved Hausser and his violation of a direct order from Hitler.

Almost exactly a month later, the Germans had recaptured Kharkov and destroyed or crippled the four Soviet armies that had driven them out of the city in February.

The divisions that played the key role in Manstein's counteroffensive were the three divisions of the Waffen-SS.

While "Leibstandarte" defended the supply base of the SS-Panzerkorps from the entire Soviet 3rd Tank Army, "Das Reich" and "Totenkopf" conducted a complex series of operations that began with a 100 kilometer thrust to the south which saved the Dnepr bridges, thus securing supply lines for the armies of Heeresgruppe Don/SA"d.

Subsequent operations by the SS divisions drove the Russians away from the rail net south of Kharkov and wrested Kharkov from the Russians once again.

During the recapture of the city, there was controversy regarding Hausser's command decisions.

Hausser has been accused of disregarding his instructions from superior officers and throwing his divisions into costly combat in the city for reasons of personal and SS prestige, in order to regain Hitler's favor.

This study has found that the records of the SS-Panzerkorps and 4. 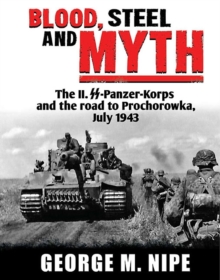 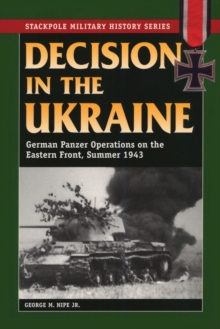 Decision in the Ukraine