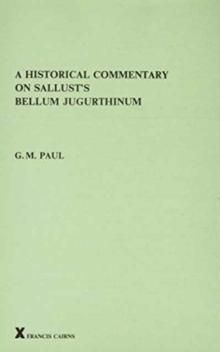 The Bellum Jugurthinum is the second historical monograph (the other is the Catilina) written by C.

Sallustius Crispus (probably 86-35 B.C.), a senator, Caesarian general and historian whose political and literary career spanned the violent years which saw the end of the Roman Republic.

The Bellum Jugurthinum describes an earlier war fought in North Africa at the end of the 2nd century B.C. against Jugurtha, an ambitious native prince who tried to win sole power in Numidia by challenging his family's traditional dependence on Rome. The main aims of this commentary are to elucidate Sallust's narrative and to clarify his historiographical principles and methods.

Such topics as the chronology and topography of the war, Numidian customs and their royal family, Sallust's sources, the conditions of political life in contemporary Rome, and Sallust's personal views are therefore given ample treatment.

Textual, linguistic and literary problems are discussed in so far as they relate to historical and historiographical understanding of Sallust's account.

Sallust was indebted to Greek and Roman predecessors, as the commentary indicates.

But he also set a new fashion in Roman historiography, as much by his sense of the realities of Roman public life as by the manner of his writing - a style which was later adopted and developed by Tacitus, the great historian of imperial Rome.