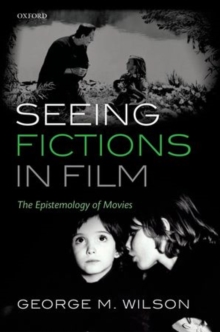 Seeing Fictions in Film : The Epistemology of Movies Hardback

In works of literary fiction, it is a part of the fiction that the words of the text are being recounted by some work-internal 'voice': the literary narrator.

One can ask similarly whether the story in movies is told in sights and sounds by a work-internal subjectivity that orchestrates them: a cinematic narrator.

George M. Wilson argues that movies do involve a fictional recounting (an audio-visual narration) in terms of the movie's sound and imagetrack.

Viewers are usually prompted to imagine seeing the items and events in the movie's fictional world and to imagine hearing the associated fictional sounds.

However, it is much less clear that the cinematic narration must be imagined as the product of some kind of 'narrator' - of a work-internal agent of thenarration.

Wilson goes on to examine the further question whether viewers imagine seeing the fictional world face-to-face or whether they imagine seeing it through some kind of work-internal mediation.

It is a key contention of this book that only the second of these alternatives allows one to give a coherent account of what we do and do not imagine about what we are seeing on the screen.

Having provided a partial account of the foundations of film narration, the finalchapters explore the ways in which certain complex strategies of cinematic narration are executed in three exemplary films: David Fincher's Fight Club, von Sternberg's The Scarlet Empress, and the Coen brothers' The Man Who Wasn't There.