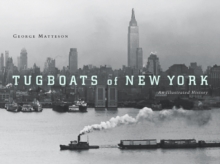 2005 Author of the Year Award Working Harbor Committee of New York and New Jersey2006 AAUP Book, Jacket, and Journal Show in the category of Trade Illustrated Book DesignTugboats are the workhorses of the greatest harbor in the world, easing massive ocean liners and garbage scows alike cleanly into their berths.

Tugboats of New York captures the history and lore of these iconic craft, from their precursors in the early 1800s to their heyday in the 1950s, when more than 700 small but potent boats dotted the harbor.

They are the most versatile of vessels, not only guiding large oceangoing ships safely into harbor, but also conducting rescue operations and navigating vast quantities of oil, cement, and scrap iron through traffic-clogged waters. A twenty-year veteran of New York tugboats, George Matteson knows the tides and currents of New York from the Bronx to the Verrazano Narrows.

His history of tugboating shows how this inherently risky business pits men and their boats against weather, water, and the scarcely measurable physics of ships and barges of far greater dimension. The story of New York's tugs parallels the broader history of New York's industrial development, from the rise of railroads to the decline of the port in the wake of labor disputes and large container ships.

It is also a story of remarkable seamen who pass their craft from pilot to apprentice over generations, along with the lore of great waterways that remain unchanged despite the lengthening shadows of skyscrapers and commerce. Rich with first-person anecdotes of life on the New York waterways and one hundred and fifty black-and-white illustrations, including rare and sumptuous photographs from the likes of Gordon Parks and Todd Webb, Tugboats of New York will fascinate readers interested in New York history, boating, and maritime history.