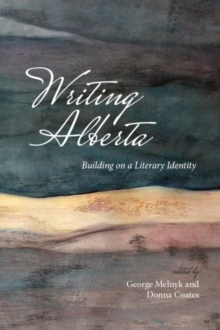 Alberta writing has a long tradition. Beginning with the pictographs of Writing-on-Stone, followed by Euro-Canadian exploration texts, the post-treaty writing of the agrarian colonization period, and into the present era, Alberta writing has come to be seen as a distinct literature.

In this volume Melnyk and Coates continue the project of scholarly analysis of Alberta literature that they began with Wild Words: Essays on Alberta Literature (2009).

They argue that the essays in their new book confirm that Alberta's literary identity is historically contingent with a diverse, changing content, that makes its definition a work-in-progress.

The essays in this volume provide contemporary perspectives on major figures in poetry and fiction, such as Robert Kroetsch, Sheila Watson, Alice Major, and Fred Stenson.

Other essays bring to light relatively unknown figures such as the Serbian Canadian writer David Albahari and the pioneer clergyman Nestor Dmytrow.

Writing Alberta: Building on a Literary Identity offers a detailed discussion of contemporary Indigenous writers, an overview of Alberta historiography of the past century, and the fascinating autobiographical reflections of the novelist Katherine Govier on her literary career and its Alberta influences.

This Collection demonstrates that Alberta writers, especially in the contemporary period, are not afraid to uncover, re-think, and re-imagine parts of Alberta history, thereby exposing what had been lain to rest as an unfinished business needing serious re-consideration.