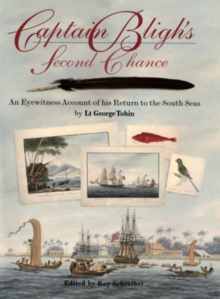 A valuable addition to the extensive literature on Bligh An insight into South Sea culture prior to Westernisation Beautiful watercolour illustrations While most people are familiar with the 'Mutiny on the Bounty', few realize that Bligh was sent back to the South Pacific two years later.

This time, with two ships, a proper officer corps, and a detachment of Marines to keep order, he succeeded in completing his original mission to transplant breadfruit to the West Indies.

A number of soon-to-be-famous names accompanied him, including Matthew Flinders who was to become one of the pioneer explorers of Australia.

Also selected for the voyage was Lieutenant George Tobin, an unusual naval officer of wide interests and an enquiring mind, who kept a journal of the voyage. This provides an unusually balanced portrait of Bligh, but what particularly interested him was the societies of the Pacific, especially that of Tahiti, where the expedition spent many months. Besides his powers of observation, Tobin also possessed another talent invaluable to a recorder: he was a gifted watercolour artist, and on the two-year voyage produced a sketchbook containing eighty-four painted sketches, several pen and ink sketches and a map of the Torres Straits.

While Tobin did the sketches during the voyage, he most likely finished the memoir in first draft around 1797. He then recopied it in 1819-20, and for the next decade he added notes. This revised version is in Sydney's Mitchell Library, and this is its first publication. The editor is Roy Schreiber, an American emeritus professor of history who has written a biography of William Bligh. He was also used by October Films both as an historical advisor and on-camera participant in their television production called 'The Real Captain Bligh'. The programme appeared a couple of years back on Channel 4 in the United Kingdom and the following year on the History Channel in the U.S.