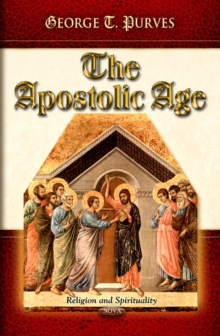 In the history of Christianity, the apostolic age stands out as one of the most critical periods.

The apostolic literature begins with four gospels and the opening chapters of Acts.

The gospels contain the testimony of the original witnesses to the life of Christ.

These gospels present the facts of Christ's resurrection and disclose the state of mind in which the disciples entered on their independent careers with the ascension of the Lord.

The author of this detailed and understandable text leads readers through a historical journey of the activities of a group of individuals who undertook what appeared to be an impossible mission and in the end changed the world.

This book is an abridged version which is accompanied by a full text CD ROM of the original book by the same name by Professor Georges T Purves, a leading historian at the turn of the 20th century at Princeton University.

A completely new and greatly expanded index has been added to both the book and the CD ROM.