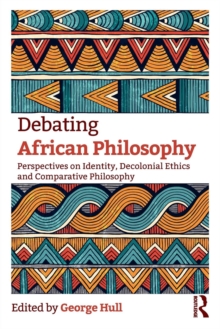 In African countries there has been a surge of intellectual interest in foregrounding ideas and thinkers of African origin-in philosophy as in other disciplines-that have been unjustly ignored or marginalized.

African scholars have demonstrated that precolonial African cultures generated ideas and arguments which were at once truly philosophical and distinctively African, and several contemporary African thinkers are now established figures in the philosophical mainstream. Yet, despite the universality of its themes, relevant contributions from African philosophy have rarely permeated global philosophical debates.

Critical intellectual excavation has also tended to prioritize precolonial thought, overlooking more recent sources of home-grown philosophical thinking such as Africa's intellectually rich liberation movements. This book demonstrates the potential for constructive interchange between currents of thought from African philosophy and other intellectual currents within philosophy.

Chapters authored by leading and emerging scholars:recover philosophical thinkers and currents of ideas within Africa and about Africa, bringing them into dialogue with contemporary mainstream philosophy;foreground the relevance of African theorizing to contemporary debates in epistemology, philosophy of language, moral/political philosophy, philosophy of race, environmental ethics and the metaphysics of disability;make new interventions within on-going debates in African philosophy;consider ways in which philosophy can become epistemically inclusive, interrogating the contemporary call for 'decolonization' of philosophy. Showing how foregrounding Africa-its ideas, thinkers and problems-can help with the project of renewing and improving the discipline of philosophy worldwide, this book will stimulate and challenge everyone with an interest in philosophy, and is essential reading for upper-level undergraduate students, postgraduate students and scholars of African and Africana philosophy.