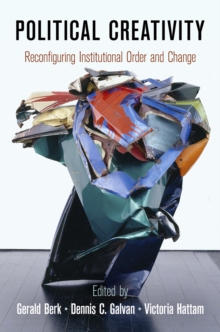 Political Creativity intervenes in the lively debate currently underway in the social sciences on institutional change.

Editors Gerald Berk, Dennis C. Galvan, and Victoria Hattam, along with the contributors to the volume, show how institutions inevitably combine order and change, because formal rules and roles are always available for reconfiguration.

Creative action is not the exception but the very process through which all political formations are built, promulgated and changed. Drawing on the rich cache of antidualist theoretical traditions, from poststructuralism and ecological theory to constructivism and pragmatism, a diverse group of scholars probes acts of social innovation in many locations: land boards in Botswana, Russian labor relations, international statistics, global supply chains, Islamic economics in Algeria, Islamic sects and state authority in Senegal, and civil rights reform, colonization, industrial policy, and political consulting in the United States.

These political scientists reconceptualize agency as a relational process that continually reorders the nature and meaning of people and things, order as an assemblage that necessitates creative tinkering and interpretation, and change as the unruly politics of time that confounds the conventional ordering of past, present, and future.