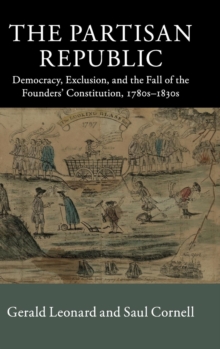 The Partisan Republic : Democracy, Exclusion, and the Fall of the Founders' Constitution, 1780s-1830s Hardback

Part of the New Histories of American Law series

The Partisan Republic is the first book to unite a top down and bottom up account of constitutional change in the Founding era.

The book focuses on the decline of the Founding generation's elitist vision of the Constitution and the rise of a more 'democratic' vision premised on the exclusion of women and non-whites.

It incorporates recent scholarship on topics ranging from judicial review to popular constitutionalism to place judicial initiatives like Marbury vs Madison in a broader, socio-legal context.

The book recognizes the role of constitutional outsiders as agents in shaping the law, making figures such as the Whiskey Rebels, Judith Sargent Murray, and James Forten part of a cast of characters that has traditionally been limited to white, male elites such as James Madison, Alexander Hamilton, and John Marshall.

Finally, it shows how the 'democratic' political party came to supplant the Supreme Court as the nation's pre-eminent constitutional institution.