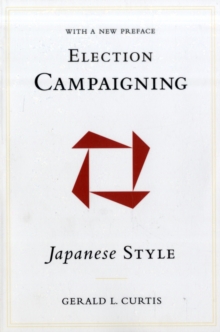 Part of the Studies of the Weatherhead East Asian Institute, Columbia University series

Running for public office in postwar Japan requires the endorsement of a political party and a sophisticated system of organizational support.

In this volume, Gerald L. Curtis provides a detailed case study of the campaign of Sato Bunsei, who in 1967 ran for the Lower House of Japan's parliament as a nonincumbent candidate of the ruling Liberal Democratic Party.

Sato's district consisted of a modern urban center and a tradition-bound rural hinterland and featured a dynamic dialectic between old and new patterns of electioneering, which led Sat? to innovate new strategies and techniques. Since its publication in 1971, sociologists and anthropologists as well as political scientists have considered Curtis's microanalysis of Japan's political system to be a vital historical document, offering insights into Japanese social behavior and political organization that are still relevant.

The Japanese edition of Curtis's pioneering study, Daigishi No Tanjo, a best-seller, is valued today as a classic and read and cited by journalists, politicians, and scholars alike. This edition features a new introduction in which the author reflects on the reception of his book and on the changes in Japan's election process since its publication.