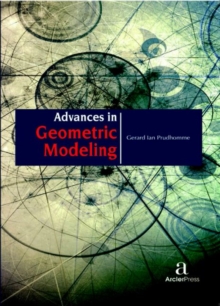 First of all, what exactly is geometric modeling? CAD (computer-aided design) software programs are utilized by designers, technical engineers, technicians, and others to produce accurate technical illustrations.

There are a variety of functions of these software programs, probably the most widely utilized function is geometric modeling.

CAD software programs may be utilized by engineers to produce geometric modeling in both two-dimensional ( 2D ), or even three-dimensional ( 3D ), versions.

Chapter 3 analyzes a manner to manufacture cerebral cortex, as well as skull reproductions, and additionally substantiate that the stereolithograph version conserves the volume of the VR method.

Chapter 4 suggests a model of an engaging 3D version of the jawbone muscle mass of the American Alligator.

Chapter 10 gives an outline of how surface area geometry of a life form corresponds to the perimeter of its actual three-dimensional structure.

Chapter 11 showcase an example of morphogenesis in the shape of a three-dimensional digital structure.

Chapter 13 shows how improvements in electronic biotelemetry systems are allowing the analysis of authoritative information on the actions of free-ranging wild animals.

Chapter 14 features a three-dimensional form of the right atrium.

Chapter 15 scrutinizes a digital three-dimensional reflection of an arm where suitable synchronous visuotactile stimulus is supplied.

Chapter 16 is designed to develop brain-computer interfaces and virtual reality.

Chapter 19 showcases how three-dimensional image stacks can give details about the framework of volumetric cultures.