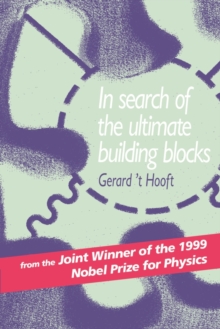 In Search of the Ultimate Building Blocks Paperback / softback

This is a first-hand account of one of the most creative and exciting periods of discovery in the history of physics.

From 1960 until 1990 theoreticians and experimentalists worked together to probe deeper and deeper into the basic structure of reality, moving closer and closer to an understanding of the ultimate building blocks from which everything in the Universe is made.

Gerard 't Hooft was closely involved in many of the advances in the development of the subject.

In this book he gives a personal account of the process by which physicists came to understand the structure of matter, and to speculate on possible directions in which the subject may evolve in the future.

This fascinating personal account of the last thirty years in one of the most dramatic areas in twentieth century physics will be of interest to professional physicists and physics students, as well as the educated general reader with an interest in one of the most exciting scientific detective stories ever.