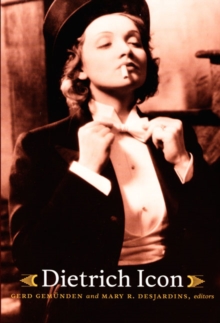 Few movie stars have meant as many things to as many different audiences as the iconic Marlene Dietrich.

The actress-chanteuse had a career of some seventy years: one that included not only classical Hollywood cinema and the concert hall but also silent film in Weimar Germany, theater, musical comedy, vaudeville, army camp shows, radio, recordings, television, and even the circus.

Having renounced and left Nazi Germany, assumed American citizenship, and entertained American troops, Dietrich has long been a flashpoint in Germany's struggles over its cultural heritage.

She has also figured prominently in European and American film scholarship, in studies ranging from analyses of the directors with whom she worked to theories about the ideological and psychic functions of film.

Dietrich Icon, which includes essays by established and emerging film scholars, is a unique examination of the many meanings of Dietrich.Some of the essays in this collection revisit such familiar topics as Germany's complex relationship with Dietrich, her ambiguous sexuality, her place in the lesbian archive, her star status, and her legendary legs, but with fresh critical perspective and an emphasis on historical background.

Among these are a reading of Marlene Dietrich's ABC-an eclectic autobiographical compendium containing Dietrich's thoughts on such diverse subjects as "steak," "Sternberg (Joseph von)," "Stravinsky," and "stupidity"-and an argument that Dietrich manipulated her voice-through her accent, sexual innuendo, and singing-as much as her visual image in order to convey a cosmopolitan world-weariness.

Still other essays consider the specter of aging that loomed over Dietrich's career, as well as the many imitations of the Dietrich persona that have emerged since the star's death in 1992. Contributors. Nora M. Alter, Steven Bach, Elisabeth Bronfen, Erica Carter, Mary R.