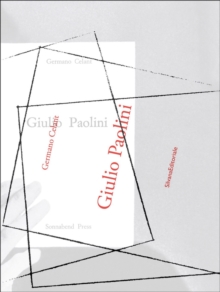 In 1972, Giulio Paolini held an exhibition in New York.

Art historian, curator, and critic Germano Celant, who coined the term 'Arte Povera' in 1967, was asked to edit the exhibition catalogue.

What followed was an ample monograph that covered the course of Paolini's career - his concepts, themes, contexts and influences.

This was an unprecedented move, as, until that time, most galleries produced simple brochures.

This monograph was one of the first in-depth and scholarly studies of a contemporary artist, and as such, paved the way for future monographs. Text in English and Italian.