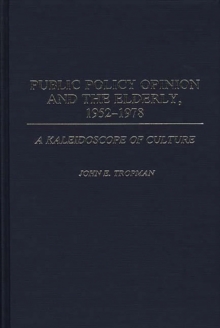 Public Policy Opinion and the Elderly, 1952-1978 : A Kaleidoscope of Culture Hardback

John E. Tropman examines older Americans and public policy opinion between 1952 and 1978 in order to see just where elder citizens fit in the overall picture.

Differences and similarities to opinions of younger groups are discussed along with the changes that took place from the conservative fifties to the liberal sixties and early seventies and back again to the conservatism of the late seventies.