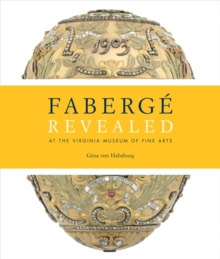 Faberge Revealed : At the Virginia Museum of Fine Arts Hardback

The exquisite objects created by goldsmith and jeweler Peter Carl Faberge and his studio in the late 19th and early 20th centuries for the aristocracy and nobility of imperial Russia are considered to be some of the most refined examples of the jeweler's art of any age.

Of greatest fascination are the extraordinary Easter eggs created as special commissions for the Russian imperial family and other notable patrons - works that remain unparalleled in their ingenuity of construction and sheer beauty. Accompanying a major exhibition Faberge Revealed represents a landmark for the Virginia Museum of Fine Arts and for Faberge scholarship.

The essays by Geza von Habsburg and other scholars present new findings on Faberge, his workshops, and the creation of these extraordinary objects.

For the first time all items by or attributed to Faberge in VMFA's collection are documented along with the museum's significant holdings of other Russian decorative arts.

Also included is a section on forgeries that bravely confronts this vexing question.

Every object has been splendidly re-photographed for this book - and the detailed photography alone should provide inestimable value for future Faberge scholarship. Richly illustrated with some 600 photographs, the volume documents an important collection bequeathed in 1947 to the Virginia Museum of Fine Arts by Lillian Thomas Pratt, of Fredericksburg, Va., the wife of General Motors executive John Lee Pratt.

Her collection, assembled between 1933 and 1946, comprised several hundred creations by the Faberge workshops and by other Russian imperial jewelers.