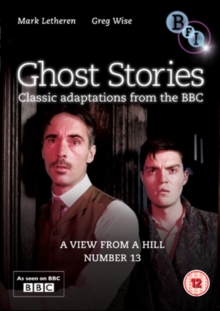 Double bill of supernatural dramas adapted by the BBC from the M.R.

James ghost stories. In 'A View from a Hill' (2005) historian Dr. Fanshawe (Mark Letheren) visits his friend, Squire Richard (Pip Torrens), and, having broken his own binoculars, borrows a pair through which, as he soon discovers, he can see an old abbey that existed hundreds of years ago next to the hanging site of Gallows Hill.

Curious, Fanshawe investigates but finds himself haunted by evil spirits.

In 'Number 13' (2006) Professor Anderson (Greg Wise) is staying in room 12 of a local hotel while working in a cathedral town to authenticate historical documents.

After being disturbed at night, Anderson discovers that a previously missing room 13 has appeared.

As his work produces evidence of witchcraft activity, he finds himself continually awoken from his sleep and, before long, he decides to find out what lies beyond door number 13...