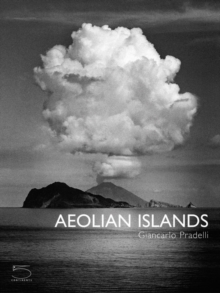 This project grew out of the artist's fervent desire to live in close contact with the sea.

To this end, Pradelli chose to move to these islands off the Sicilian coast (Lipari, Vulcano, Salina, Filicudi, Alicudi, Panarea, Stromboli) during the winter, when the light is brighter and clearer.

These are not the summer Eolians, but islands shrouded in an atmosphere of profound, silent calm, with only the hiss of the sea and the unsettling rumble of the volcanoes. The project was not to produce a photographic record of the islands, but to register a personal visual journey, in which Pradelli identifies with the places themselves, feeling their pulse and portraying them in their changing moods. Pradelli has included only two human figures in his portraits of the islands: Turi the fisherman and Angela, whose simple gestures manage to encapsulate the very essence of life itself.

He has chosen to work in black-and-white so as to be able to stress the powerful geometry of the landscape and the faces and in order to highlight the contrast between the white of the sky and the fire and the black of the sea and the land.