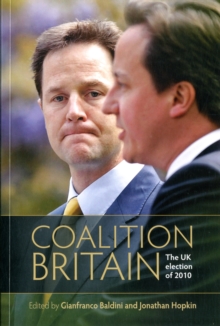 The 2010 election has transformed the British political landscape, ushering in a coalition government for the first time since the Second World War, and breaking up the UK's traditional pattern of two-party dominance.

This book analyses the implications of this turning point in British history, looking beyond the sound and fury of the election campaign in search of the deeper causes and long-term consequences of the 2010 poll.

As well as assessing the reasons for Labour's defeat and the Conservatives' failure to win the election outright, the book also addresses the impact of the global financial crisis and the problems facing the British economy one decade into the new century.

This volume will be of interest both to academic specialists, students and the interested general reader seeking insights into the rapidly changing British political scene. -- .