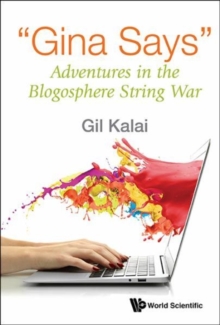 by Gil (The Hebrew Univ Of Jerusalem, Israel) Kalai

In the summer of 2006 two books attacking string theory, a prominent theory in physics, appeared: Peter Woit's 'Not Even Wrong' and Lee Smolin's 'The Trouble with Physics'.

A fierce public debate, much of it on weblogs, ensued.Gina is very curious about science blogs.

Can they be useful for learning about or discussing science?

What happens in these blogs and who participates in them?

Gina is eager to learn the issues and to form her own opinion about the string theory controversy.

She is equipped with some academic background, including in mathematics, and has some familiarity with academic life.

Her knowledge of physics is derived mainly from popular accounts.

Gina likes to debate and to argue. She is fascinated by questions about rationality and philosophy, and was exposed to various other scientific controversies in the past.This book uses the blog debate on string theory to discuss blogs, science, and mathematics.

Meandering over various topics from children's dyscalculia to Chomskian linguistics, the reader may get some sense of the chaotic and often confusing scientific experience.

The book tries to show the immense difficulty involved in getting the factual matters right, and interpreting fragmented and partial information.