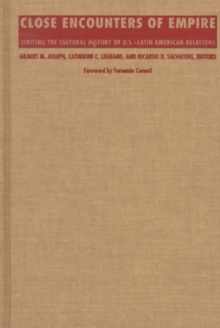 New concerns with the intersections of culture and power, historical agency, and the complexity of social and political life are producing new questions about the United States' involvement with Latin America.

Turning away from political-economic models that see only domination and resistance, exploiters and victims, the contributors to this pathbreaking collection suggest alternate ways of understanding the role that U.S. actors and agencies have played in the region during the postcolonial period.

Exploring a variety of nineteenth- and twentieth-century encounters in Latin America, these theoretically engaged essays by distinguished U.S. and Latin American historians and anthropologists illuminate a wide range of subjects.

From the Rockefeller Foundation's public health initiatives in Central America to the visual regimes of film, art, and advertisements; these essays grapple with new ways of conceptualizing public and private spheres of empire.

As such, Close Encounters of Empire initiates a dialogue between postcolonial studies and the long-standing scholarship on colonialism and imperialism in the Americas as it rethinks the cultural dimensions of nationalism and development.