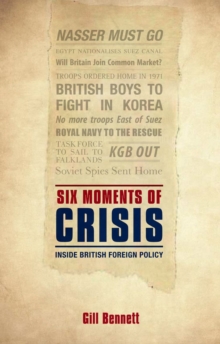 Former Whitehall insider Gill Bennett unravels the story of six crucial British foreign policy challenges since the Second World War, from the Korean War to the Falklands conflict, offering an inside account of episodes that shaped Britain's position in the world for decades to come - and in some cases still arouse controversy to this day. Lifting the lid on the making of British foreign policy from Clement Attlee to Margaret Thatcher, Bennett reveals each decision in a way that has never been done before: telling the story from the inside out and without hindsight.

The result is a book that explains not just why these controversial decisions were taken, but one that shows us how history is actually made - and also just how difficult these big decisions really were.

Gill Bennett considers exactly what ministers knew at the time; how personal experience, relationships, past events and prevailing circumstance influenced the decision-making process; and how the balance of history was tipped in each case: by argument, moral imperative, obligation - or even sheer force of personality.