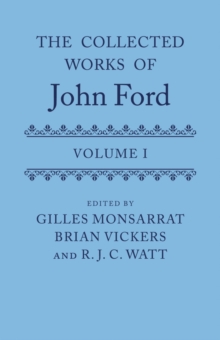 The Collected Works of John Ford : Volume I Hardback

Part of the OET Complete Works of John Ford series

John Ford (1586-1640?) was one of the leading playwrights of the generation following Shakespeare, best known for such plays as The Broken Heart, 'Tis Pity She's a Whore, and Perkin Warbeck.

This is the first collected edition of John Ford's works since 1869.

All texts have been freshly edited from the original Quarto editions, which have been collated to identify press corrections.

Two texts are edited from manuscripts. A full commentaryis provided for all texts, giving historical explanations of the vocabulary, parallel passages in other works by Ford, and theatrical annotation (where relevant).

The edition is arranged largely in chronological order. Volume 1 contains all of Ford's poems and prose works: Honor Triumphant and The Monarch's Meeting, an opportunistic celebration of a royal visit and the amorous-chivalric contests; Fame's Memoriall, a panegyric to Charles Blount; two poems newly ascribed to Ford, Funerall Elegie and the Elegie for John Fletcher; his greatest poem, Christes Bloodie Sweat; the didactic prose works The Golden Meane and A Line of Life; andUncollected Pieces, commendatory verses prefixed to plays or other works by friends of Ford, and of undisputed authenticity.

There is also an introduction dealing with Ford's biography.