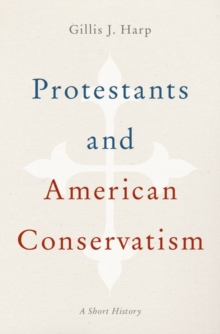 The rise of the modern Christian Right, starting with the 1976 Presidential election and culminating in the overwhelming white evangelical support for Donald Trump in the 2016 election, has been one of the most consequential political developments of the last half-century of American history. And while there has been a flowering of scholarship on the history of American conservatism, almost all of it has focused on the emergence of a conservative movement after WorldWar II.

Likewise, while much has been written about the role of Protestants in American politics, such studies generally begin in the 1970s, and almost none look further back than 1945. In this sweeping history, Gillis Harp traces the relationship between Protestantism and conservative politics in America from the Puritans to Palin.

Christian belief long shaped American conservatism by bolstering its critical view of human nature and robust skepticism of human perfectibility. At times, Christian conservatives have attempted to enlist the state as an essential ally in the quest for moral reform. Yet, Harp argues, while conservative voters and activists have often professedto be motivated by their religious faith, in fact the connection between Christian principle and conservative politics has generally been remarkably thin.

Indeed, with the exception of the seventeenth-century Puritans and some nineteenth-century Protestants, few American conservatives have constructeda well-reasoned theological foundation for their political beliefs.

American conservatives have instead adopted a utilitarian view of religious belief that is embedded within essentially secular assumptions about society and politics.

Ultimately, Harp claims, there is very little that is distinctly Christian about the modern Christian Right.