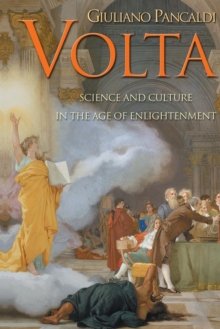 Volta : Science and Culture in the Age of Enlightenment Paperback / softback

Giuliano Pancaldi sets us within the cosmopolitan cultures of Enlightenment Europe to tell the story of Alessandro Volta--the brilliant man whose name is forever attached to electromotive force.

Providing fascinating details, many previously unknown, Pancaldi depicts Volta as an inventor who used his international network of acquaintances to further his quest to harness the power of electricity.

This is the story of a man who sought recognition as a natural philosopher and ended up with an invention that would make an everyday marvel of electric lighting.

Examining the social and scientific contexts in which Volta operated--as well as Europe's reception of his most famous invention--Volta also offers a sustained inquiry into long-term features of science and technology as they developed in the early age of electricity.

Pancaldi considers the voltaic cell, or battery, as a case study of Enlightenment notions and their consequences, consequences that would include the emergence of the "scientist" at the expense of the "natural philosopher." Throughout, Pancaldi highlights the complex intellectual, technological, and social ferment that ultimately led to our industrial societies. In so doing, he suggests that today's supporters and critics of Enlightenment values underestimate the diversity and contingency inherent in science and technology--and may be at odds needlessly.

Both an absorbing biography and a study of scientific and technological creativity, this book offers new insights into the legacies of the Enlightenment while telling the remarkable story of the now-ubiquitous battery.