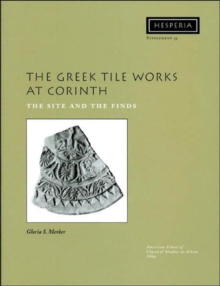 The Greek Tile Works at Corinth : The Site and the Finds Paperback / softback

Part of the Hesperia Supplement series

A series of kilns at ancient Corinth known as the Tile Works are given final publication in this long-awaited book, based on excavations conducted in 1939 and 1940 (as war was closing in) by Carl Roebuck and Arthur Parsons, and renewed briefly in 1950 by Gladys Weinberg.

The artisans at the Tile Works produced not only roof tiles but a whole range of terracotta articles from the 6th to 4th centuries B.C., with one break in production in the late 5th to early 4th century.

These products included, at different periods, architectural sculpture and decorated revetments; heavy household pottery such as mortars and lekanai; loomweights; votive furniture such as altars and plaques; and even some fine and semi-fine pottery.

The standard of craftsmanship was very high and the artifacts produced found enthusiastic markets in other parts of Greece; as the revetments of roofs at Delphi, for example, and as mortars in the markets of Athens.

The Tile Works, therefore, along with the Potters' Quarter, was one of the major and most prolific industrial establishments in ancient Corinth.

In this study, the principal features and deposits are first discussed, in order to establish the chronology of the three successive kilns on the site, and to try to relate them to known events in Corinth.

The manufactures are then considered, beginning with a discussion of fabrics and techniques of manufacture, then moving on to typology and dating.

The study concludes with a presentation of the Corinthian pottery and other artifacts found at the Tile Works but not made there, and a catalogue of terracottas by Charles Williams. 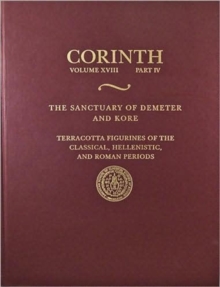 Also in the Hesperia Supplement series   |  View all 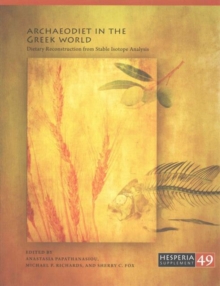 Archaeodiet in the Greek World