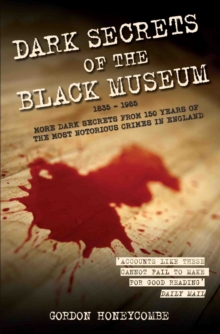 The Crime Museum of New Scotland Yard - invariably known as 'the Black Museum' - houses a remarkable collection of exhibits connected with the most notorious crimes in British history.

Gordon Honeycombe was granted privileged access to classified records, and reveals in this book the secrets of twenty British murders between 1835-1985. The author's painstaking research, which reaches beyond the Black Museum to other archives, as well as contemporary newspapers and similar accounts, allows him to give searching detailed accounts of murders and manslaughter committed by such infamous characters as William Palmer, Charles Peace, Donald Nielsen (the 'Black Panther'), the serial killer Dennis Nielsen, and Ruth Ellis, the last woman to be hanged in Britain. Here too are the political assassination of the Bulgarian writer Georgi Markov, and the murder by IRA bomb of four soldiers of the Household Cavalry in Hyde Park, in a work that provides a fascinating, if uncomfortable, insight into the minds and methods of those who practise murder.